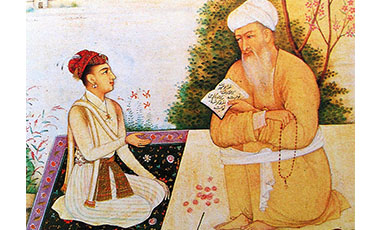 Few weeks ago, on a Sunday morning I was on the way with Mehmood to attend burial of a friend’s father when I thought I was crossing Aurangzeb Road in Lutyens’s Delhi. I recognised the road but the name looked different when Mehmood told me that Aurangzeb Road has now been renamed. Solemn occasion and sombre mood so could not think of this more than in terms of current politics of renaming roads and Indian cities.

Later one evening, coincidentally I happened to hear somebody on YouTube talk about the trial of the seventeenth century Crown Mughal Prince Dara Shikoh.

In the Court of his brother Aurangzeb, Prince Dara said ……”the creator is known by many names. He is called God, Allah, Prabhu, Jehova, Ahura Mazda and many more names by devout people in many different lands.” Further, “Yes, I believe that Allah is the god of all people of the world who simply call them by different names. I believe that there is only one great cosmic creator even if people have different places of worship and revere God in many different ways.”

Perhaps a very modern political philosophy for a seventeenth century crown prince who had social harmony and tolerance utmost in his mind.

Unfortunately, Aurangzeb brutally killed his brother Dara and committed the most heinous and barbaric act of ‘’offering’’ his mutilated head to his ailing old father on his dinner table.

How could a man do such cruel painful things to his old infirm father!

For now, I do not see Aurangzeb Road in Delhi anymore.

But I do not see any Dara Shikoh Road either to celebrate his vision of social harmony and tolerance. His remains lie buried in an unidentified grave in Humayun tomb in Delhi.

The derelict ‘Dara Shikoh Library’ near Kashmiri Gate, currently a defunct museum and an abandoned office of Archaeological Survey of India is the only reminiscent of his thoughts and intellects.

Emperor Ashoka’s Choice of Rampurva in Champaran: India Should Restore the Original Glory of This Sacred Site as Mark of Respect

The Splendid Pillars of Ashoka

This website uses cookies to improve your experience while you navigate through the website. Out of these, the cookies that are categorized as necessary are stored on your browser as they are essential for the working of basic functionalities of the website. We also use third-party cookies that help us analyze and understand how you use this website. These cookies will be stored in your browser only with your consent. You also have the option to opt-out of these cookies. But opting out of some of these cookies may affect your browsing experience.
Necessary Always Enabled
Necessary cookies are absolutely essential for the website to function properly. These cookies ensure basic functionalities and security features of the website, anonymously.
Functional
Functional cookies help to perform certain functionalities like sharing the content of the website on social media platforms, collect feedbacks, and other third-party features.
Performance
Performance cookies are used to understand and analyze the key performance indexes of the website which helps in delivering a better user experience for the visitors.
Analytics
Analytical cookies are used to understand how visitors interact with the website. These cookies help provide information on metrics the number of visitors, bounce rate, traffic source, etc.
Advertisement
Advertisement cookies are used to provide visitors with relevant ads and marketing campaigns. These cookies track visitors across websites and collect information to provide customized ads.
Others
Other uncategorized cookies are those that are being analyzed and have not been classified into a category as yet.
SAVE & ACCEPT
MORE STORIES
HISTORY

The Splendid Pillars of Ashoka